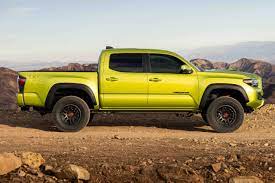 With the release of the 2021 Toyota Tacoma, which is undoubtedly a fierce-looking ride, there are many people looking for ways to get even more out of the pick-up. Even though it’s a 278 horsepower engine with 265 lb-ft of torque, we can never get enough, can we? Here are a few ways you can get more performance out of this outstanding vehicle.

Get Better Airflow, Filtration, And Let That Engine Roar

Many car enthusiasts fail to realize how much of a difference changing their exhaust system makes when it comes to performance. The best exhaust system for Toyota Tacoma power increase should be able to effectively give your engine better airflow by eliminating waste gases more efficiently. The filtration process allows air to flow through your engine better and thus fuelling more combustion—which ultimately translates to more horsepower. Of course, there are other advantages such as reducing pollution levels, because toxic waste gases are converted to less harmful alternatives.

This should be obvious, even though it is one of the more costly upgrades you can get. Usually seen on old-school muscle cars, a supercharger looks like a beefed up exhaust system that is on the hood of a car. It is basically an air compressor that forces more air into the engine, allowing it to burn more and thus providing more horsepower. Keep in mind that this option will decrease your fuel economy, and it is not cheap to install either. However, this is probably the ultimate method to get more performance out of any vehicle, not to mention the aggressive visuals, sound, and driving experience.

Another way you can increase airflow into your Tacoma’s engine is to get throttle body spacers. These are metal pieces that are bolted to the intake manifold, effectively swirling or redirecting airflow into the manifold. Following the same principles as above, the increase in airflow translates to an increase in power and fuel economy. Some people claim that throttle body spacers are just a gimmick, but tests have shown that there is some improvement in horsepower when they are installed. However, the difference is not as noticeable as installing an aftermarket exhaust system (or better yet, a supercharger). Nonetheless, they continue to be a popular aftermarket add-on aimed at increasing the power of many vehicles and reducing the load on the engine.

As you can see the main method to increase power in an engine like that of a Toyota Tacoma involves increasing how air goes in and out of the engine. Because combustion requires oxygen (a main component of air), airflow is extremely important for an internal combustion engine and any method that helps pump more air into your engine will help you increase the performance of your Toyota Tacoma (or anything other vehicle you’re driving). Consider the aforementioned upgrades to your pick-up if you are looking to get more out of it’s already powerful engine. This will enable you to use it for more recreational purposes as well as using the vehicle for work (such as construction or towing).

Cristiano Amon Interview: What to Expect From the Incoming CEO of Qualcomm

What is the purpose of  Mykohlscard .com and how can we utilise it?...
Read more

Alienware Aurora 2019 has become a significant addition to the elevated windows...
Read more

What is the purpose of  Mykohlscard .com and how can we utilise it?...
Read more

Alienware Aurora 2019 has become a significant addition to the elevated windows...
Read more